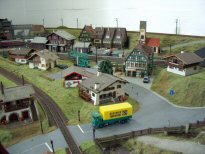 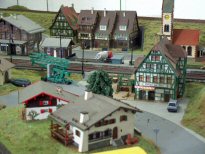 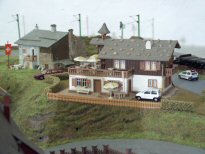 As a child I was interested in a railway on which I could ride a lot of trains. Later on the landscape grew. More trains in my collection saw to it that the control and security became more important. For many years I’ve had an analogous railway with kilometres of wire underneath my railway and a lot of relays to make several links. During my studies of electronics I discovered that this jumble of wires and relays were unnecessary. Moreover the relays were expensive, securing a station a little cost me a lot of money, which a student doesn’t have. A search for simple electronic links started.
Studying, working, getting married, building a house, having kids,... There wasn’t much time left to work on my railway. When Marklin came out with a digital system, my interest came back and I started with a digital runned track. After years of experience with digital steering, in which a whole evolution found place, I had to come to the conclusion that there are being used a lot of unnecessary and expensive digital modules. So I went writing software and I’ve used a universal interface as connection for my track. I used easy and cheap modules to connect switches, signals,... with a minimum of wires. Writing the software took a lot of time so I went searching for already existing software.
Railroad & Co offered the most universal interface, a decent and simple graphical user interface. The Intellibox saw to the connection with the railway, because it can be used with almost any system available. The discovery of Loconet offered a possibility of simple wiring, handheld, several PCs and simple connections for module tracks. The only problem was that the Loconet modules seemed way to expensive and/or too complex. Through internet I discovered some interesting Loconet designs, which I’ve changed to obtain simple and quite cheap modules, in that way I could build a decent railway. After many years of pleasure with my track I’ve experienced that you can achieve the best results with simple things. In the meantime, I also test my train track with other software iTrain, because of price, multiple languages, network possibilities, ...

And therefore with this site you can all enjoy some experiences with me.